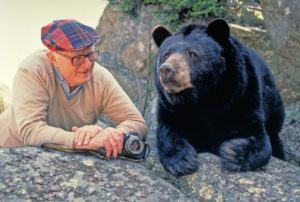 Hugh Morton with Mildred the Bear.

Many of you have been to Grandfather Mountain over the years and have seen thewonderful animals.  Mildred the bear is a legend on the mountains as she came and won the hearts of all.  She and Mr. Morton use to go on picnics and eat fig newtons and orangeade.  In fact she loved people more than animals and frequently was seen on the golf course and around the mountain.  She died several years ago but left behind her daughter named Maxie.  She had 3 cubs February 3rd and has been very protective but last week they were able to photograph them for the first time.

Unfortunately one of my favorites, Aspen, has died.  Aspen was a 15 year old cougar that was a great ambassador of his species. He had a gentle spirit! He was 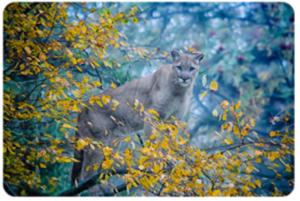 born in Colorado and arrived here on a twin-engine plane October 2003.  Aspen was three months old and was so small he couldn’t be with the adult cougars.  They took him in the office where he played with toys, pounced on the keepers, chased the cats and nursed on blankets where he licked the heads of his trainers.

No matter where he was in his habitat, when he saw his keeper friends he would light up and start purring.  I took my grandchildren to have a behind the scenes with the animals and witnessed his love for the keepers.  They called out to Aspen and he came running and purring as loud as he could.  They in turn gave him a new toy to play with and rubbed his back.   Needless to say, he was raised by humans so he loved them and enjoyed interacting with them.  He never was close to the other cougars but he,like Mildred the bear, loved people.  I will have to say that was a day I will never forget.  I didn’t realize they purred or could love the keepers as he did.  What a special cougar he was.  He will be missed!!

Dollar Day is the month of April on Grandfather Mountain. Please click on link for more information